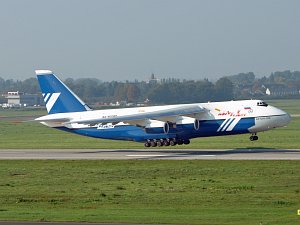 Photo ©: Karsten Palt
The Antonov An-124 is a four-engined heavy cargo freighter with a payload of 150 tonnes (330700 lb) developed by the soviet design bureau OKB Antonov (today Antonov ASTC, Ukraine). It was developed as a military strategic heavy airlift transport aircraft.
The An-124 is equipped with nose and tail cargo doors. The shoulder-wing configuration in conjunction with the 24-wheel landing gear allows operations from semi prepared landing strips. The aircraft has the ability to kneel down for easier front loading.
- to top -