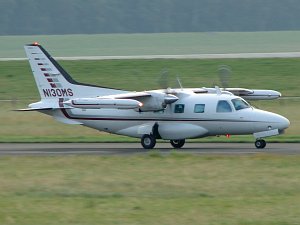 Photo ©: Karsten Palt
The Mitsubishi MU-2 is a twin-engined nine-to eleven-seat utility and corporate aircraft produced by the Japanese manufacturer Mitsubishi Heavy Industries. Production was performed by Mitsubishi's North American subsidiary Mitsubishi Aircraft International Inc. in San Angelo, Texas / USA.
The MU-2 was produced in 13 variants with two different fuselage lengths (short: 10,13m / 33ft 3in, long: 12,01m / 39ft 5in). MU-2C and MU-2K in service with the Japan Ground Self-Defense Force for the liaison and photo reconnaissance role are designated LR-1 while MU-2E in service with the Japan Air Self-Defense Force, JASDF for the search- and rescue (SAR) role are designated MU-2S.
- to top -