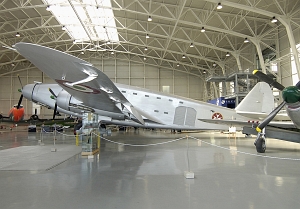 Photo ©: Aldo Bidini (photos at airliners.net)
The Savoia-Marchetti SM.82 Canguru is a three-engine bomber and transport aircraft produced by the Italian manufacturer Savoia-Marchetti. The SM.82 was very limited used as a bomber.
The SM.82 had a capacity for up to 40 troops. The maximum weapon load and freight payload was up to 4000 kg (8818 lb). The SM.82 was in service with the Italian Air Force (Aeronautica Militare Italliana) until the early 1960s.
- to top -