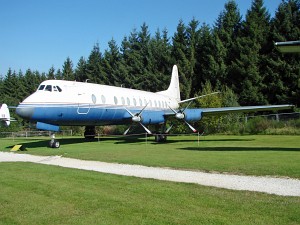 Photo ©: Karsten Palt
The Vickers Viscount is a four-engine medium-range turboprop airliner with a capacity of up to 74 passengers produced by the British manufacturer Vickers-Armstrongs.
The first and main production version Viscount Type 700 had initially a capacity of 32 passengers. The improved and stretched (+3ft 10in / 1,20m) variant Viscount Type 800 was able to carry 53 - 70 passengers.
- to top -