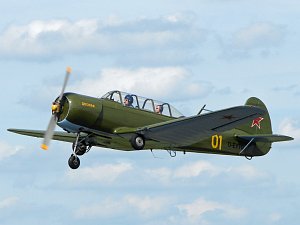 Photo ©: Karsten Palt
The Yakovlev Yak-18 is a single-engine two-seat trainer aircraft developed by the Soviet Design Bureau OKB Yakovlev (OKB-115).
Early variants of the Yak-18 were equipped with a conventional (taildragger) landing gear. The Yak-18 was also licence-built in the Peoples Republic of China as the Nanchang CJ-5 and the CJ-6 (Yak-18A).
- to top -