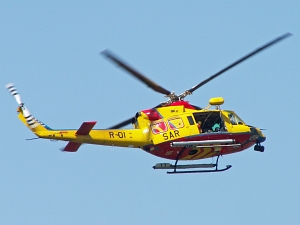 Photo ©: Karsten Palt
The Bell 412 is a twin-engined fiveteen-seat medium utility helicopter produced by the US-American manufacturer Bell Helicopter Textron, produced in Dallas Fort Worth (USA) and Mirabel, Quebec (Canada).
The Bell 412 is development of the Bell 212 with four-blade main-rotor. Like the Bell Bell 212, the Bell 412 is powered by a Pratt & Whitney Canada PT6T-3 Twin-Pac engine. The Twin-Pac consists of two coupled PT6 turbines driving a common output reduction gearbox. Engine power rating data is for both engines together. The Bell 412 was also license-built in Italy by Agusta (Agusta-Bell AB412) and is today license-built in Indonesia by IPTN (NBell 412). An option with fixed tricycle wheel landing gear was available for early variants.
- to top -