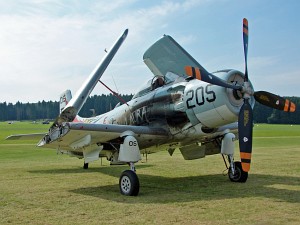 Photo ©: Karsten Palt
The Douglas AD (A-1) Skyraider is a single-engine single-seat fighter bomber produced by the US American manufacturer Douglas Aircraft Company. The Skyraider was used as a land-based and carrier-based attack aircraft. The existing variants (AD-4 through AD-7) were redesignated in 1962 in A-1D through A-1J. Skyraider variants include two-and four-seat electronic countermeasures versions, three- and four-seat night attack versions, three-and four-seat airborne early warning versions and two-seat fighter bomber versions.
The Douglas Skyraider was built in seven versions with several variants, starting with the AD-1, then AD-2 and AD-3 with various minor improvements. The AD-4 is powered by a more powerful Wright R-3350-26WA engine, the AD-5 fuselage was significantly widened, allowing side-by-side seating. The AD-6 was basically a AD-4B with improved low-level bombing equipment, and the final production version AD-7 was powered by a Wright R-3350-26WB engine.
- to top -