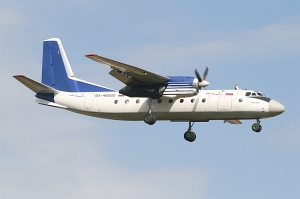 Photo ©: Svido Stanislav (photos at airliners.net)
The Antonov An-24 is a twin-engined turboprop short-range transport- and passenger aircraft by the Soviet design bureau OKB Antonov (today Antonov ASTC, Ukraine).
Some of the several produced variants are equipped with an additional turbojet engine Tumanski RU-19A-30 with 8,8 kN (1978 lbf) thrust, installed in the right-hand engine nacelle. This engine served as an APU (Auxiliary Power Unit) and for improvement of the start performance. The An-24 is today still in license-production in several variants in the Peoples Republic of China as the Harbin Y-5.
- to top -