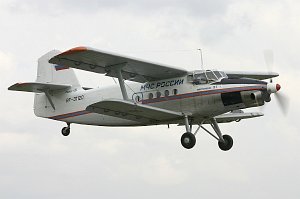 Photo ©: MilanNN (Photos at airliners.net)
The Antonov An-3 is a single-engine turboprop powered multi-purpose biplane aircraft developed by the Soviet design bureau OKB Antonov (today Antonov ASTC, Ukraine).
The An-3 is a tdevelopment of the Antonov An-2. Although maiden flight was in 1980, first An-3 were delivered in late 1990's. Most An-3 are converted An-2.
- to top -