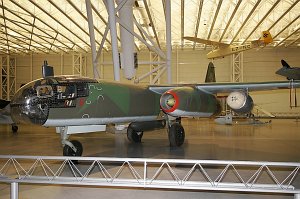 Photo ©: Guilherme Bystronski (photos at airliners.net)
The Arado Ar 234 is a twin-engined single-seat Reconnaissance and Bomber Aircraft produced by the German manufacturer Arado Flugzeugwerke GmbH in operation with the German Luftwaffe during the last two years of the World War II.
The Arado Ar 234 Blitz was the world's first operational jet powered bomber.
- to top -