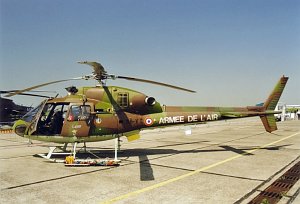 Photo ©: Karsten Palt
The Aérospatiale AS 355 Ecureuil 2 is a twin-engine six- to seven-seat light utility helicopter produced by the French manufacturer Aerospatiale, today Eurocopter. AS 355 in military duty are designated AS 555 Fennec.
The AS 355 Ecureuil 2 is a twin-engined development of the Aérospatiale AS 350 EcureuilAérospatiale AS 350 Ecureuil. Earlier AS 355 were marketed in the North-American market as Twin Star. The AS 355 is also produced under license by Helibras (today a subsidiary of Eurocopter) in Brazil.
- to top -