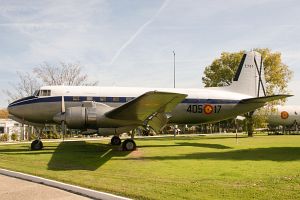 Photo ©: Karsten Palt
The CASA C-207 Azor is a twin-engine military short- to medium-range transport aircraft produced by the Spanish manufacturer CASA, Construcciones Aeronáuticas SA.
The C-207 Azor was designed as a regional airliner. It is a development of CASA C-202 Halcon (T.6). The Spanish Government ordered 10 C-207 (T.7A) and 10 C-207C (T.7B) as CASA could not find any commercial customer.
- to top -