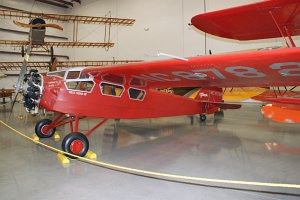 Photo ©: Karsten Palt
The Cessna Model A is a series of single-engine four-seat light touring aircraft produced by the US-American manufacturer Cessna Aircraft Company.
The second letter of the Model designation (eg AW) shows the installed engine model. Model AA (14 built) was powered by Anzani 10 (89kW / 120hp), Model AC (only 1 built) was powered by a 97kW/130hp Comet engine. Model AF (3 built) had a Floco/Axelson with 112kW/150hp and the Model AS (4 built) a Siemens-Halske engine (93kW / 125hp). The main production Model AW (48 built) as shown in the specs is equipped with the Warner Scarab 97kW/125hp. The Cessna Model BW of which 13 have been built is a three-seat variant with a 164kW/220hp Wright J-5 engine.
- to top -