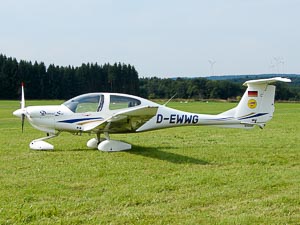 Photo ©: Karsten Palt
The Diamond DA40 Diamond Star is a single-engine four-seat light touring and trainer aircraft produced by the Austrian manufacturer Diamond Aircraft Industries, it's Canadian subsidiary and by a joint-venture in the Peoples Republic of China.
The DA40 is a four-seat development of the Diamond Aircraft DA20 / DV20 Katana. The DA40 is also built by a Joint-venture with Shandon Bin Ao Aircraft Industries in the Peoples Republic of China.
- to top -