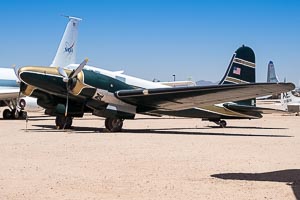 Photo ©: Karsten Palt
The Douglas B-23 Dragon is a twin-engined medium bomber aircraft produced by the US-American manufacturer Douglas Aircraft Company.
The B-23 Dragon is a development of the Douglas B-18 Bolo. As the B-23 was not suitable for combat 18 aircraft were converted to UC-67 transport aircraft.
- to top -