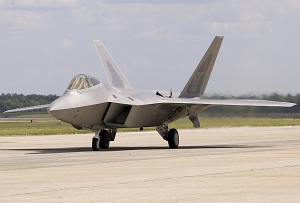 Photo ©: Greg Phelps (photos at airliners.net)
The Lockheed Martin F-22 Raptor is a twin-engined single-seat multi-role fighter aircraft with stealth capability produced by the US-American manufacturer Lockheed Martin Aeronautics Company.
The F-22 is able to fly at speeds above Mach 1.5 without using their afterburners (supercruice cabability). The F-22 is the successor of the McDonnell Douglas F-15. Development and production of the F-22 is together with Boeing Defense, Space & Security. Production of F-22 was cutted after only 195 aircraft due to the high costs of approx. 150 million US$.
- to top -