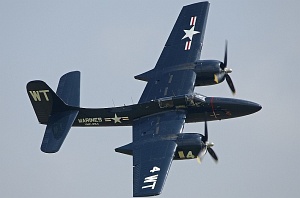 Photo ©: Andreas Kauert (Photos at airliners.net)
The Grumman F7F Tigercat is a twin-engined single- or two-seat fighter bomber and night-fighter aircraft produced by the US-American manufacturer Grumman Aircraft Engineering Corporation. The F7F was operated by the United States Navy and the United States Marine Corps.
Some F7F were converted to firebomber aircraft after their military service.
- to top -