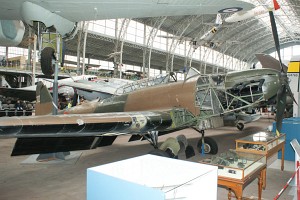 Photo ©: Karsten Palt
The Fairey Battle is a single-engine light bomber aircraft with a crew of three produced by the British manufacturer Fairey Aviation Company Limited. The Fairey Battle was also used as a trainer aircraft and as a target tug aircraft. The Battle was used by the Royal Air Force, Royal Australian Air Force, and Royal Canadian Air Force. Further operators were Belgium, South Africa and Turkey.
The total production numbers include 1029 built by Austin Motors and 18 built by Avions Fairey in Belgium.
- to top -