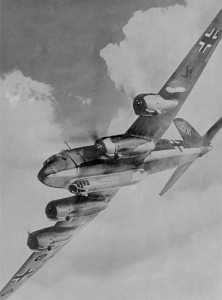 The Focke-Wulf Fw 200 Condor is a four-engine medium-range airliner with a capacity of max. 25 passengers produced by the German manufacturer Focke-Wulf Flugzeugbau GmbH, designed by Kurt Tank. The Fw 200 in service with the German Luftwaffe was used as a long-range maritime-patrol aircraft, transport aircraft and as a bomber.
- to top -