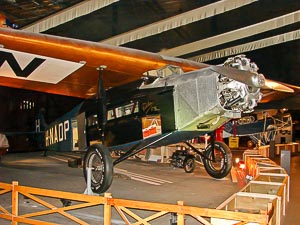 Photo ©: Karsten Palt
The Fokker F.VII is a single- or three-engine ten-seat airliner produced by the Dutch manufacturer Fokker, N.V. Koninklijke Nederlandsche Vliegtuigenfabriek. The F.VII/3m is the three-engine variante, known as the Fokker Trimotor.
Several single engine aircraft were later converted to 3 engine models. The Fokker F.VII was license-built in several countries. Aircraft for the American market were built by Atlantic Aircraft Corporation, a Fokker subsidiary (since 1927 Fokker Aircraft Corporation of America).
- to top -