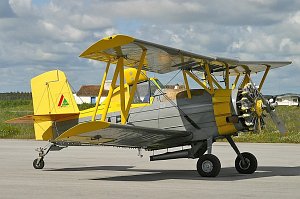 Photo ©: Luis Rosa (www.luisrosa.net)
The Grumman G-164 Ag-Cat is a single-engine single-seat agricultural biplane aircraft developed by the US-American manufacturer Grumman Aircraft Engineering Corporation and produced by Schweizer Aircraft.
Grumman subcontracted the Ag-Cat program to Schweizer Aircraft who produced the Ag-Cat under contract from 1957 through 1980. Schweizer purchased the type certificate including production rights in 1980. Production continued as Schweizer Ag-Cat until 1995.
- to top -