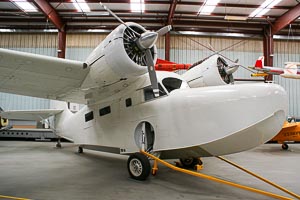 Photo ©: Karsten Palt
The Grumman G-21 Goose is a twin-engined eight-seat amphibious utility aircraft produced by the US-American manufacturer Grumman Aircraft Engineering Corporation.
The most numerous of the military G-21 versions were the United States Navy and US Coast Guard variants, designated the JRF. Many G-21 Goose have been converted to turboprop engines.
- to top -