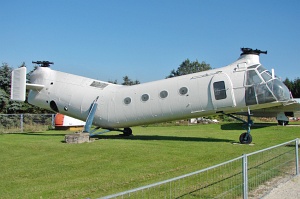 Photo ©: Karsten Palt
The Piasecki H-21 Workhorse / Shawnee is a single-engine tandem rotor medium transport helicopter produced by the US-American manufacturer Piasecki Helicopter Corp., later Vertol Aircraft Corporation. The H-21 was redesignated CH-21 in 1962.
The Piasecki H-21 is a development of the Piasecki HRP-2 Rescuer. 32 H-21C Shawnee were assembled by Weser Flug GmbH in Germany for the West German Army.
- to top -