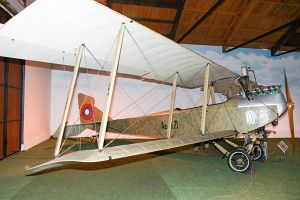 Photo ©: Karsten Palt
The Hansa-Brandenburg B.I is a single-engine two-seat military trainer and observation biplane aircraft produced by the German manufacturer Hansa und Brandenburgische Flugzeugwerke (short: Hansa-Brandenburg). B.I is the military designation, company designation is model D and FD. It was designed by Ernst Heinkel. It was operated by the Kaiserliche und Königliche Luftfahrtruppen or K.u.K. Luftfahrtruppen (Hungaro-Austria).
The Hansa-Brandenburg FD differs from the D by having a Benz Bz.III engine instead of the Bz.II. The Czechoslovak Manufacturer Aero produced a copy of the after WWI as its first mass production model Ae-10 (A-1), powered by a Mercedes D.I engine.
- to top -