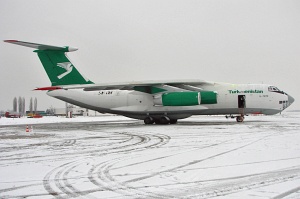 Photo ©: Karsten Palt
The Ilyushin Il-76 is a four-engine heavy transport aircraft developed by the Soviet design bureau Ilyushin OKB, today JSC Ilyushin Aviation Complex, Russia. The Il-76 is in operation with both military and civil operators.
The Il-76 formed also the basis of the Soviet/Russian AWACS platform Beriev A-50 Shmel and the Chinese AWACS platform KJ-2000. The Il-76 is also used as an airborne tanker, designated Il-78.
- to top -