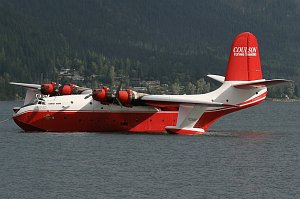 Photo ©: Douglas Noblet (Photos at airliners.net)
The Martin JRM Mars is a four-engine transport flying boat produced by the US-American manufacturer Glenn L. Martin Company.
The total production of the JRM Mars includes one prototype aircraft, five JRM-1 (later converted to JRM-3) and one JRM-2. The JRM Mars was initially operated by the US Navy. After retirement of US Navy service, four JRM Mars were converted to civil water-bombers for aeral firefighting, operated by Flying Tankers Inc., later by Coulson Flying Tankers. The payload for water is 27.216 kg (60.000 lbs).
- to top -