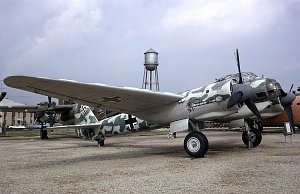 Photo ©: Steve Williams (photos at airliners.net)
The Junkers Ju 88 is a twin-engined four-seat multi-role combat aircraft roduced by the German manufacturer Junkers Flugzeug- und Motorenwerke AG. The Ju 88 was used by the German Luftwaffe as a medium bomber, dive bomber, heavy fighter, night fighter, torpedo bomber and as a reconnaissance aircraft.
The Ju 88 was built in several variant with the general airframe design remaining unchanged. The production of the Ju 88 was carried out by Junkerswerke, Arado Flugzeugwerke, Henschel, Dornier, Norddeutsche Dornier-Werke, Ernst Heinkel Flugzeugwerke, Allgemeine Transportanlagengesellschaft (ATG) and by Siebel Flugzeugwerke.
- to top -