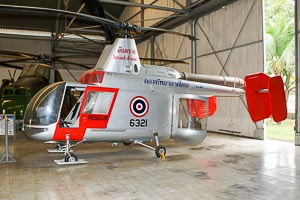 Photo ©: Karsten Palt
The Kaman K-600 / H-43 Huskie is a single-engine three-to-twelve-seat utility helicopter with intermeshing rotors produced by the US-American manufacturer Kaman Aircraft Corporation, today Kaman Aerospace Corporation. The Kaman K-600 was designated HUK-1 by the US Navy, the HOK-1 by the US Marine Corps and the H-43 by the US Air Force. In 1962 all variants in US military service were redesignated, HUK-1 to UH-43C, HOK-1 in OH-43D and H-43 in HH-43. The main roles were Search and Rescue and firefighting.
The first variants of the H-43 (HOK-1 / HUK-1 / H-43A) were piston engine powered with a slightly shorter fuselage than the HH-43B and HH-43F with a passenger seating for max. eight. The HH-43B was the main production variant.
- to top -