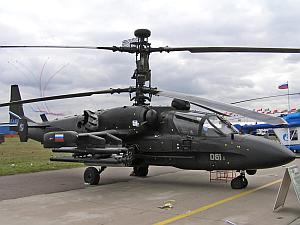 Photo ©: Andrei Nesvetaev (Photos at airliners.net)
The Kamov Ka-52 is a twin-engined two-seat combat helicopter with coaxial rotors developed by the Soviet Design Bureau OKB Kamov (OKB-2), today Kamov JSC, Russia, produced by Arsenyev Aviation Company PROGRESS, JSC.
The Kamov Ka-52 is a two-seat development of the Kamov Ka-50. The Ka-52 is equipped with ejection seats for both pilots.
- to top -