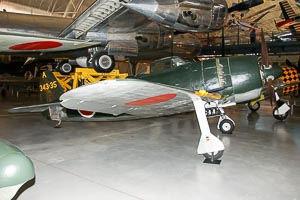 Photo ©: Karsten Palt
The Kawanishi N1K is a single-engine single-seat fighter aircraft produced by the Japanese manufacturer Kawanishi, operated by the Imperial Japanese Navy Air Service. The initial version N1K1 Kyofu is a fighter floatplane. It was replaced by the land-based variants N1K1-J Shiden and later by the improved N1K2-J Shiden-Kai.
The total production numbers of the Kawanishi N1K series includes 90 N1K1 Kyofu , 1007 N1K-J Shiden, & 1435 N1K2-J Shiden-Kai.
- to top -