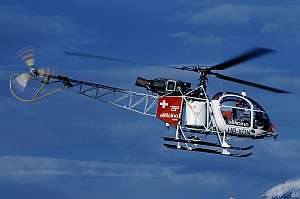 Photo ©: Markus Herzig (swissheli.com)
The Aérospatiale SA 315B Lama is a single-turboshaft-engine five-seat light utility helicopter for hot and high operations produced by the French manufacturer Société Nationale Industrielle Aérospatiale (SNIAS), today EADS and Eurocopter. The SA 315B Lama was initially developed by Sud-Aviation.
The SA 315B Lama is a development of the Sud-Aviation/Aerospatiale Alouette II with the engine and the rotor system of the Alouette III. The Lama was also license-built by HAL, Hindustan Aeronautics Limited of India as the HAL Cheetah.
- to top -