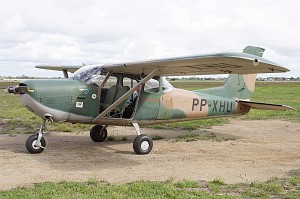 Photo ©: Allan Martins Antunes (Photos at airliners.net)
The Neiva 360C / 420L Regente is a single-engine three- or four-seat light utility aircraft produced by the Brazilian manufacturer Industria Aeronautica Neiva. The Neiva Regente was operated by the Brazilian Air Force as U-42 / C-42 (Regente 360C) and L-42 (Regente 420L).
The Regente 420L is a three-seat variant powered by a Continental IO-360D engine instead of the 145 hp / 108 kW Continental O-300 engine.
- to top -