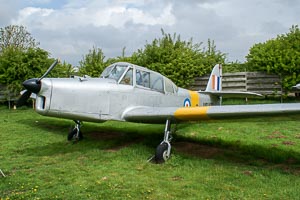 Photo ©: Karsten Palt
The Percival P.40 Prentice is a single-engine three-seat trainer aircraft produced by the British manufacturer Percival Aircraft Company.
Production of the Percival Prentice was carried out by Blackburn Aircraft Limited. The Prentice was also license-built by HAL, Hindustan Aeronautics Limited in India for the Indian Air Force.
- to top -