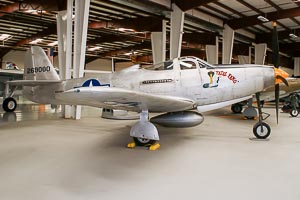 Photo ©: Karsten Palt
The Bell P-63 Kingcobra is a single-engine single-seat fighter and fighter bomber aircraft produced by the US-American manufacturer Bell Aircraft Corporation.
The Bell P-63 is a development of the Bell P-39 Airacobra. The Soviet Air Force was the largest P-63 operator with approx. 2500 aircraft.
- to top -