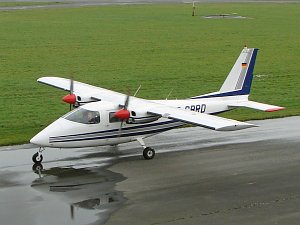 Photo ©: Karsten Palt
The Partenavia P.68 is a twin-engined six-seat passenger transport and aerial survey aircraft produced by the Italian manufacturer Partenavia and later by Vulcanair.
The P.68 Observer aerial survey variant was developed together with the German manufacturer Sportavia-Pützer. The AP68TP-300 Spartacus and the AP68TP-600 Viator, today Vulcanair A-Viator, are turboprop-powered versions.
- to top -