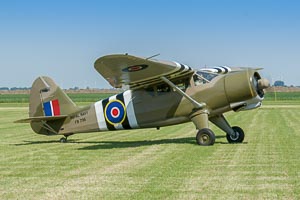 Photo ©: Karsten Palt
The Stinson Reliant is a single-engine four to five-seat touring and utility aircraft produced by the American manufacturer Stinson Aircraft Company. The military utility variant UC-81 and the AT-19 trainer variant were used by United States Army Air Corps, later the US Army Air Forces. Designation in Royal Air Force and Royal Navy service was Reliant I.
The Reliant was built in several variants designated SR-1 through SR-10. Variants SR-1 through SR-6 have a straight wing, SR-7 through the final variant SR-10 have a different gull wing. After World War II surplus military Reliant UC-81 and AT-19 were sold as the Vultee V-77.
- to top -