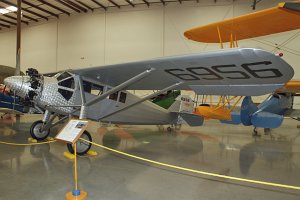 Photo ©: Karsten Palt
The Ryan Brougham is a series of single-engine five- or six-seat airliner developed by the US-American manufacturer Ryan Aeronautical Company and produced by B.F. Mahoney Aircraft Corporation and later by Ryan-Mahoney Aircraft Corporation. The Brougham series includes the B-1, B-3, B-5 and the B-7 Brougham.
The Ryan Brougham is a development of the Ryan M-2 mail plane. The Ryan B-1 Brougham was the first production model powered by a Wright J-5 engine (150 built). Of the slightly larger six seat B-3 only 9 were built. The Brougham B-5 of which 61 were built was powered by a Wright J-6 engine (300 hp / 224 kW). The last version B-7 (8 built) was powered by a Pratt & Whitney C-1 Wasp engine with 420 hp (313 kW).
- to top -