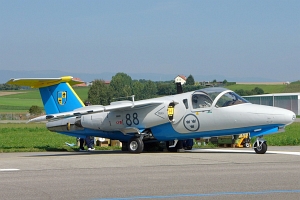 Photo ©: Mike Vallentin
The Saab 105 is a twin-engined two-seat trainer and light ground-attack aircraft produced by the Swedish manufacturer Saab AB. The Saab 105 is also used as a reconaissance aircraft and as a four-seat liaison aircraft. Swedish Air Force (Flygvapnet) designation is SK 60.
The Saab 105 is only operated by the Swedish Air Force and the Austrian Armed Forces (Saab 105Ö). The two-seat versions can also be used as a four-seat liaison aircraft by replacement of the two ejection seats. The Saab 105 (SK 60) was originally powered by two Turbomeca Aubisque low-bypass turbofan engines, license-built by Svenska Flygmotor as RM9. Most Swedisch SK 60 were later (starting in 1995) modified by replacement of the engines with Williams FJ 44-1C (Volvo Aero RM15) turbofan engines.
- to top -