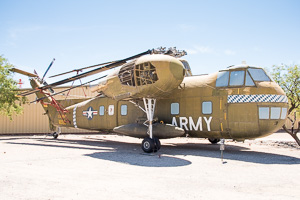 Photo ©: Karsten Palt
The Sikorsky S-56 is a heavy twin-engined transport helicopter with a capacity of 36 passengers built by the American manufacturer Sikorsky Aircraft. Main productions variant were the CH-37A (H-37A) of the US Army and the CH-37C (HR2S-1) of the US Marine Corps.
The Sikorsky S-56 is the largest piston-engine helicopter ever built. Nearly all (90 of the 94 built) CH-37A helicopters were later modified to the CH-37B version. Some S-56 were operated after military service by Keystone Helicopters.
- to top -