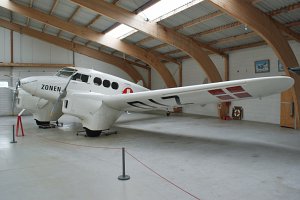 Photo ©: Karsten Palt
The SAI KZ IV is a twin-engined ambulance aircraft produced by the Danish manufacturer SAI, Skandinavisk Aero Industri A/S. The KZ IV was specially designed for the Danish rescue company Zone-Redningskorpset. The KZ IV accommodates two patients on stretchers, two escorts and a flight crew of two.
Only two SAI KZ IV were built, the OY-DIZ (1944) and the OY-DZU (1949).
- to top -