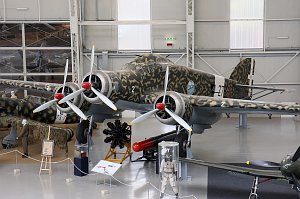 Photo ©: Max Bryansky (foxbat.ru)
The Savoia-Marchetti SM.79 Sparviero is a three-engine medium bomber and torpedo bomber aircraft produced by the Italian manufacturer Savoia-Marchetti. The SM.79 was also used as transport and reconaissance aircraft and for close air support missions.
SM.79B and SM.79JR are twin-engined variants. The twin-engined variant SM.79JR, powered by Junkers Jumo 211 engines, was license-built in Romania.
- to top -