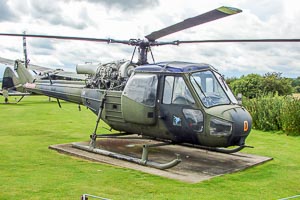 Photo ©: Karsten Palt
The Westland Scout respectively Westland Wasp is a single-engine light military utility and shipboard anti-submarine helicopter produced by the British manufacturer Westland Helicopters. The Scout is the land based utility variant, the Wasp the shipboard anti-submarine variant with 4 wheel landing gear.
The Westland Scout & Wasp are developments of the Saunders-Roe (SARO) P.531. The total production numbers include 150 Scout and 133 Wasp.
- to top -