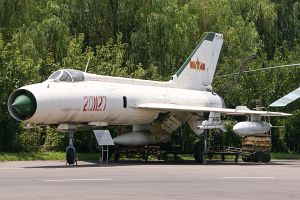 Photo ©: Karsten Palt
The Shenyang J-8 is a twin-engine single-seat interceptor fighter aircraft produced by the Chinese state-owned manufacturer Shenyang Aircraft Corporation. It is in service with the Chinese People's Liberation Army Air Force and Navy Air Force.
Although the J-8 appears similar to MiG-21 and Su-15 it is the first indigenous Chinese interceptor aircraft and not a direct development of a Soviet aircraft model but it shares some technology. The Shenyang J-8II is a redesign with a new forward fuselage and air intakes. The changes allow to implement a more powerful radar system. The most current variants are designed as multi-role fighter aircraft.
- to top -