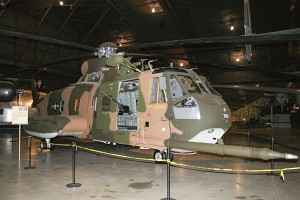 Photo ©: Karsten Palt
The Sikorsky S-61R is a twin-engined medium transport and rescue helicopter produced by the American manufacturer Sikorsky Aircraft. The US Air Force designations are CH-3C / CH-3E Sea King and HH-3E Jolly Green Giant for the CSAR (Combat Search and Rescue) variant. The US Coast Guard designation is HH-3F Pelican.
The S-61R is a variant of the Sikorsky S-61 (SH-3)with an altered fuselage with a rear loading ramp and a tricycle landing gear. The boat-hull was replaced by a different also water-tight hull and the side floats have been replaced by large sponsons. The S-61R was also license built in Italy by Agusta as the AS-61R. The HH-3E has an inflight refuel capability. In 1967 two HH-3E were the first helicopters to cross the Atlantic Ocean from New York to Paris non-stop with 9 in-flight refuelings.
- to top -