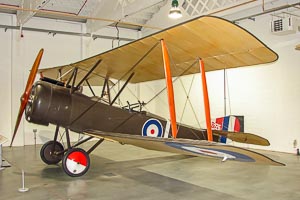 Photo ©: Karsten Palt
The Sopwith 1½ Strutter is a single-engine one or two-seat multi-role military biplane aircraft produced by the British manufacturer Sopwith Aviation Company. The "one-and-a-half"-Strutter was mainly used as a fighter and bomber aircraft.
The Sopwith 1½ Strutter was the first British aircraft with a synchronized machine gun. The 1½ Strutter was used by the Royal Naval Air Service, the Royal Flying Corps and the French Aéronautique Militaire. Further operating countries were the Netherlands, Russia, USA, Belgium, Romania, Japan, Australia, Afghanistan, Brasilia, Mexico, Poland, Norway, Greece, Ukraine, Estonia, Lithuania and Latvia. It was license built in France and Russia.
- to top -