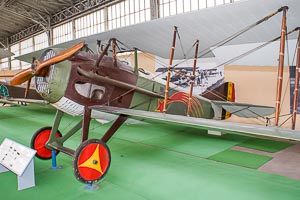 Photo ©: Karsten Palt
The SPAD S.XIII is a single-engine single-seat fighter biplane aircraft produced by the French Manufacturer SPAD, Societe Pour L'Aviation et ses Derives.
The SPAD XIII is a development of the SPAD S.VII. One of the main operators of the S.XIII (S-13) was the United States Army Air Service in WWI.
- to top -