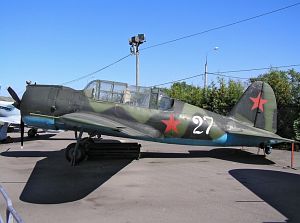 Photo ©: Andrei Nesvetaev (Photos at airliners.net)
The Sukhoi Su-2 is a light single-engine two-seat bomber and reconnaissance aircraft developed by the Soviet Design Bureau Sukhoi.
The Su-2 was already obsolete at the beginning of the Great Patriotic War as the eastern front was called in Soviet Union.
- to top -