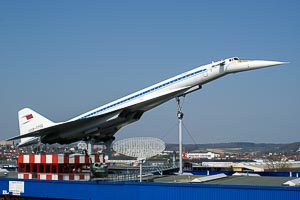 Photo ©: Karsten Palt
The Tupolev Tu-144 is a four-engine supersonic airliner with a capacity of maximum 95 passengers developed by the Soviet Design Bureau OKB Tupolev.
The Tu-144 was the world's first supersonic airliner. The first flight was two month before the Concorde. Only 55 passenger flight were flown, for safety and commercial reasons.
- to top -