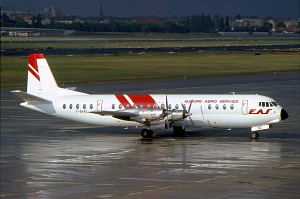 Photo ©: Peter Seemann (Photos at airliners.net)
The Vickers Vanguard is a four-engine medium range turboprop airliner with a capacity of up to 139 passengers produced by the British manufacturer Vickers-Armstrongs.
The Vanguard is a development of the Vickers Viscount. Most of the only 44 built Vanguards were later converted to freighters (called Cargoliner and Merchantmen).
- to top -