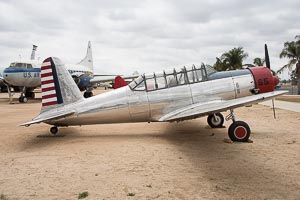 Photo ©: Karsten Palt
The Vultee BT-13 Valiant is a single-engine two-seat trainer aircraft produced by the US-American manufacturer Vultee Aircraft, Inc., later Consolidated Vultee Aircraft Corporation ? Convair. The Vultee Valiant was the basic trainer aircraft for the second phase of pilot training for the US Army Air Corps, later the US Army Air Forces. The BT-15 is a Wright engine powered variant. The designation in US Navy service was SNV (SNV-1 for BT-13A and SNV-2 for BT-13B). Company designation was Vultee V-74.
- to top -